There is no doubt that women are finally no longer tolerating harassment and demanding action. That’s the good news. The bad news is all this news is re-traumatizing people who have been assaulted or harassed. 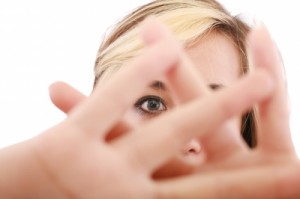 As someone who has both been harassed and assaulted and as a person who teaches people how to get harassment to stop, I thought I would weigh in on my own experiences and as an educator. Note: Some of this post is graphic. I don’t believe in sugar coating what happened.

I am personally not being re-traumatized as much as remembering painful episodes of my past.

For instance: I was inappropriately touched by Bob Barker at a TV station in a room full of reporters about 10 years before that scandal broke. I reported it. I was believed. It was handled appropriately and he was blacklisted from doing things with animal welfare nonprofits in LA after that.

I had a boss who used to lean back in his chair and rub himself through his pants in front of me whenever I would go to talk to him. He only did that to me and not our secretary and not when we had customers. At first I thought maybe he wasn’t aware he was doing it – turns out he was. My position was eliminated 2 weeks after I reported him. I don’t regret reporting him.

I’ve been stalked by a past boyfriend and had to deal with the FBI on that situation.

I survived an attempted rape by an employee of a firm I was interviewing with. I didn’t go to subsequent interviews and when I told the owner a few years later what had happened he was horrified and wished I had told him immediately because that explained why he would lose female customers. It was negatively effecting his business as people like me who could hire him – wouldn’t. But he also didn’t fire the guy upon learning this.

The current news isn’t traumatizing me. But keep in mind that I’ve had therapy for PTSD as a result of the stalking incident. The coping techniques I learned may be helping me now not be triggered by PTSD. However, it is upsetting me greatly. And I do spend time crying – out of guilt that I didn’t do more in my situations to protect other women.

What this is doing is making me remember things that happened and reconsider how I handled it. In most cases, I regret not reporting more or making a bigger stink than I did. At the time I didn’t make a bigger stink because I didn’t want to deal with whatever it was. I just wanted to get away and get on with my life. The problem is because I didn’t make a big stink, other women were victimized. In every single case.

There was guy who asked me to dance at a club in Hawaii. He told me his name, told me he was an army captain, grabbed my arm and started dragging me to the door. I knew if he got me out of the club – he would rape me. I escaped, but didn’t report him. I was a regular at this club in Hawaii. Friends with all the bartenders. And still, didn’t report it. I told my girlfriends. I have no doubt that other women were raped by this man because of my inaction. Same with the guy who attempted to rape me as part of a job interview. He clearly had other victims.

Same with Bob Barker – he had other victims. I wonder what would have happened if I had turned around and slapped him in front of all those reporters. Would what he had been doing come to light sooner and more women been protected had I acted slightly differently? In the Bob Barker case – I reported him immediately upon reaching safety. I was believed and supported and would have been if I had slapped him in the newsroom. But my instinct was self-preservation. Same with the guy in the bar dragging me to the door. Self-preservation. Same with the attempted interview rape. Self-preservation prevented me from telling his boss. I didn’t know if his boss was part of the scam. This guy had contacted me in a professional capacity.

I am not having PTSD triggered. I am dealing with a tremendous amount of guilt that I should have done more to protect the women who inevitably came after me. I just didn’t think of them at the time. I knew they existed, because how could they not. But at the same time, my mental health was more important than them. And I think now that was a mistake.

I teach adults and kids how to use behavioral science techniques to stop bullies. (See my book The Bully Vaccine or any of my online courses.) To get kids to do this – you must convince them, not to do it for themselves, but to protect other kids who are also being victimized. I tell them to look around – see the other kids – because there are always other victims. Once kids get that – they become fearless. They won’t always act to protect themselves, but they will almost always act to protect others.

We women – need to do the same. We need to realize that what happened to us wasn’t about us. It is about the fact a predator is on the loose and needs to be stopped because if he isn’t, others will be victimized, just like us. There are always other victims. People hearing these reports need to take them seriously and treat them as the violent crime they really are.

Anita Hill recently wrote an essay asking the question:  what if we treated this like embezzlement or any other type of crime? We would respond to reports of harassment and assault differently if we thought of them as actual crimes. We need to start doing that. If I had my purse stolen (and I have) I would report it and try to make sure those criminals were locked up so they couldn’t steal from anyone else. We need to have the same approach to sexual predators. Both as victims and as people hearing about the assaults.

I think the main reason why people are saying me too and naming names – is exactly because of this. If we don’t name names, other people will be victimized! I don’t want to live with this guilt anymore. The only way out is to name names and start making much bigger stinks when we encounter predators.