Skip to content
Part of the process to get unwanted behaviors like harassment to stop requires reporting. What do women need to do to properly report harassment in the workplace? 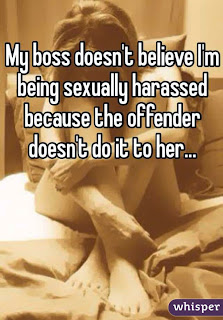 1. What steps can a women take to prove sexual harassment at work?

The number 1 thing is to document all interactions that are inappropriate.

Date, time, location, any witnesses, any proof and a very specific description of what happened exactly. Not – I was harassed, but on this date at this time in this location he said this and put his hand on my shoulder. Don’t talk about how it made you feel – just what can be validated.

2) What steps should they take if they want to report it?

Once you have documentation in place, you take a good look at the power structure. Are there any allies you can recruit higher up than the person harassing you?  Get the lined up. Report according to the proper channels. It is important to realize that this – won’t stop the harassment. You do this to set up the conditions to seek monetary damages if the employer fails to protect you.  You give them the opportunity to protect you – use the system they set up. Only after that fails, can you sue.

If your main goal is to get the harassment to stop, you need to retrain the harasser to make them stop. You can use reporting and documentation to do that – but that is separate and apart from the reporting process itself. Again – you have to view this as you helping your employer so that they can put pressure on the harasser to stop. But don’t be surprised if this fails or results in escalation of behavior or retaliation. The behavioral extinction process will play out and that means – there will be an escalation of behavior as that is predicted to occur. There are ways to plan and manage this and reporting is part of that – but not the only part.

3) What if it is a he said/she said situation?

Document anyway. Every interaction. Make sure your response to these interactions deny the abuser their reward and report – every single incident. Once you start reporting – you have to report everything. Consistently. Over time. This is the only way to make it stop. Also, this will help the company understand just how prevalent something is. What you are doing is triggering the extinction process by denying the reward. You keep denying and reporting and the abuser escalates. You keep denying them the reward and eventually – they either stop or they blow out – spectacularly. Your goal as the victim is to get that to happen as quickly as possible so – relentless consistency in denial of reward and reporting to increase cost of behavior.  What normally happens is that as the abuser’s behavior worsens, it becomes easier for everyone else to see it more clearly. You just have to remain calm and professional and allow them to blow out.

4) Why do women, even high-ranking execs, tend not to report harassment

Because most of the stuff we encounter is not actually physically threatening we just deal with it. If we raised a fuss at every single thing that happened, we would be doing nothing but that. It’s only really worth it if the behavior is aggressive and dangerous. And even then – it’s easier to extract ourselves then to fight. But we need to because – abusers always have other victims and if we aren’t going to do this for ourselves, we need to do it so that there isn’t a next victim.

If you want to learn more about how to end harassment & retaliation in the workplace – take my online course or streaming video.