Anyone who is vulnerable will probably be bullied at some point and we are all vulnerable. 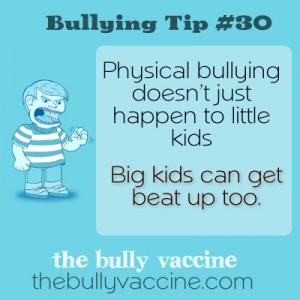 It isn’t just kids who have to deal with bullying. Adults and the elderly can become victims as well. The thing that surprised me the most after publishing my book for kids was how quickly I was asked about bullying in nursing homes.

I shouldn’t have been. Bullying is an adaptive behavior. It’s how some people have learned to get their way and settle disputes. And for some people it’s addictive. The dynamics at play for children are there for people in a nursing home. Everyone is relatively speaking, without power. In a school, the adults have the power. In a nursing home, the staff do. In order to survive as a resident of either, you have to get some power over what’s happening to you. You have to secure friendships to provide a sense of stability and security. Unfortunately, some people amass that sort of social support through bullying.

The reason we see bullying in nursing homes is because bullying is about power. The less real power you have, the more likely a person is going to try and get an appearance of power some other way.

According to this article (http://exa.gmnews.com/news/2013-07-11/Front_Page/Bullying_can_affect_elderly_too.html) by the Allentown Examiner, Arizona State University did a study on bullying among seniors and found that 10 to 20% of them are bullied by their peers. Ugh. This is about the same percentage as young people who are chronically bullied.

What this means is that learning how to deal effectively with mean people is a lifelong problem. There is never an age where you will outgrow the need to use these skills. And it really doesn’t matter who you are or where you are, you are going to eventually come across someone who will, for whatever reason they have, try to make your life miserable. And if you think that the only people who don’t have to worry about bullies are bullies, you are wrong. Bullies can also become victims. There is a whole body of research on victim bullies – as they have the worst social outcomes of all bullied groups.

My point, learn how to deal with mean and annoying people effectively. Teach your kids these skills explicitly. Don’t expect them to learn it on their own. There is a system you can use to tackle these problems. Learn it. (Hint – you can learn it in my book – which is free with a paid membership to this site (http://bullyvaccineproject.com/series/bully-vaccine-toolkit/) or purchase the book at Amazon (http://thebullyvaccine.com/book.html)