The standard advice to kids who are being bullied is to ignore the bullies and they will eventually go away. As well-meaning as this advice is, it doesn’t work. 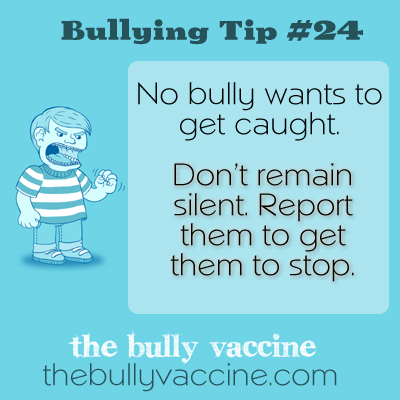 I understand why this advice is given. Bullies say mean things to people and insult them. That’s what they do. You shouldn’t take their verbal barbs personally because it isn’t about you. And you shouldn’t let mean people determine your self-worth. And that’s really good advice.

The problem is, this advice doesn’t help get it to stop, it may actually make the problem worse and, very few people, let alone kids, are able to truly ignore mean people and not worry that maybe what they said is true. When you tell a kid to ignore it, you are asking them to do something, they can’t really do and then blaming them when it doesn’t work.

Instead what kids and adults should do is confront them. How you confront them is key. Remember, our goal is to not reward them while simultaneously increasing the cost associated with bullying behavior. This is best done by calling them out publicly for their bad behavior. This removes the reward – because you aren’t afraid of them, and, if done well, it will also stigmatize their bad behavior and make them look bad in front of other people. In other words, calling them out also increases the social costs of the bullying.

What you say to a bully isn’t that important as long as what you say it is calm, polite and does not provide the emotional response this person is looking for. Your consistent neutral response is what will make the behavior go away. Plan on something you can say, make eye contact, so they know you aren’t afraid, and say what you want to say in a calm and neutral tone of voice. You do this for 3 reasons. 1) so the bully knows you aren’t afraid of them, 2) so that you call them out for their behavior – politely of course and 3) so that you are not seen as part of the problem – the last thing you want is to get angry and then have the teacher think this is a conflict, when it really isn’t. A calm neutral response that what the bully did wasn’t OK – is all that is required. If they continue, you report them. Again, you don’t do this to get them in trouble, you do it to increase the cost of their behavior.

Do this consistently – every single time, and they will eventually give up. Sure, they will fight you for a while, but if you remain calm and refuse to fight them but refuse to let them get away with it either, you will succeed in getting them to stop.

Just don’t think you can ignore them and expect it to magically stop on its own. It won’t. Your silence enables and encourages bullies to bully you more. Every time they get away with it – it makes them want to do bully you more and they will try even harder to get a response from you. Only by confronting them politely, calmly and responsibly and reporting them consistently will get this obnoxious behavior to stop.