A Q&A on the basics of cyberbullying and how not be become a cyberbully and how to avoid falling prey to them. 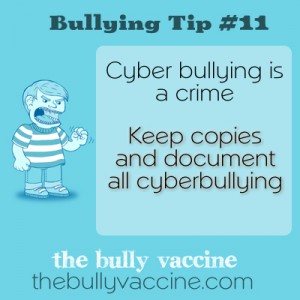 1) What does it look like?
Bullying is about power and it’s primarily about using power to include or exclude people. It can also be used to intimidate people into going along with the bully through coercion or fear. There is no real difference between cyber bullying or cyber-harassment. Bullying is harassment.

Cyberbullying is a form of verbal bullying. It can manifest as insults, snide comments, passive aggressive behavior, inappropriate jokes, gossiping and spreading rumors in order to socially exclude someone or ruin their reputation. Bullies aren’t very creative; they usually choose one of several topics in their attempt to insult their target (sex, gender, ethnicity, skin color, attractiveness and more). Cyberbullying can and often does include implicit or explicit threats if the bully’s needs or desires are not met.

2) What are the repercussions?
Because cyber bullying leaves a paper trail in terms of documentation and proof that the harassment or bullying occurred the repercussions can be severe. It’s one thing to be accused of calling someone a name. It’s another to have proof that you indeed called someone an inappropriate name in an email.

Certain forms of harassment are illegal and possibly criminal. Cyberbullying, because of its electronic nature, leaves an evidence trail that can implicate a person in wrong doing and depending on what form the bullying takes (threats or name calling or libel or slander), the repercussions can be loss of job, ruining of reputation, and lawsuits. And that’s just for the perpetrator.

For victims, they can have their lives ruined by slander campaigns very quickly and recovering from these sorts of online attacks can take years and a heavy psychological toll.

3) How do you avoid being a bully or a victim?
The way to avoid being a bully is to be civil. Don’t disparage anyone. Treat everyone with respect, even people you disagree with and resist the urge to dehumanize people through ad hominin attacks. Don’t threaten people to get your way either.

The way to avoid being a cyberbully is to not put into print or electronic device any of your bad behavior. The reality is though most bullies can’t resist the immediacy of the electronic form and use it without thinking through to the consequences of their actions.

The way to not be a victim of cyberbullying is to never respond or take the bait. Bullies require an audience and they want to get a reaction from their victims. While it’s impossible to not respond when they are up in your face, you can conveniently pretend that you simply didn’t see their electronic missives insulting you. Even if they do insult you or lie about you, don’t respond. Simply take a screen shot of the offending material and report it. Do this every single time and let them dig their own hole. If you respond or engage with them the resulting documentation trail will look a lot like a conflict. By not engaging with them you will trigger an escalation of the bully’s behavior (this is predicted to happen, this is not “if it will,” it will). The bully will try more aggressive ways to get to you. They will become ruder and more aggressive in their emails and use of electronics. That’s fine. Document every single thing they do and create the documentation trail that shows just how inappropriate their behavior is.

You not responding makes it clear the exchange is indeed one sided and not a two way conflict. The beautiful thing about cyberbullying is just how clearly you can see the extinction burst of the behavior as the bully loses control of the situation and themselves. Some of the email trails that get left are nothing short of spectacular. Let the bully dig their own hole. It has nothing to do with you, even if you are the target.