Sometimes the problem isn’t the haters, it’s the hate. 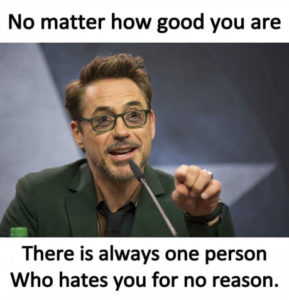 It’s her way of not acting on her emotions – which may be quite strong, but instead, thinking about what she is thinking and feeling.

This is a good practice to get into. Haters want you to hate. By refusing to – you deny them what they want. Which is for you to be as unhappy as they are.

Instead, realize – their hate – is their problem. You don’t have to join them in their hating. You can instead – pity them, and focus on things that bring you joy.

When you are being targetted by haters – it can be quite upsetting, which is why – Taylor Swift’s advice is to … shake it off. Shake it off.