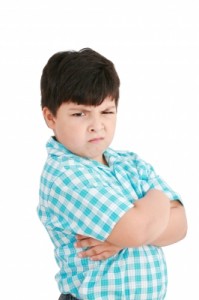 Our instinct as parents is to protect our kids. And the easiest way to protect them is to keep them away from the bullying kid. But, if that kid lives in your neighborhood, then keeping them away will mean preventing your kid from playing with others in the neighborhood and isolating them even further.

A better solution would be for your kid to still get to play with the others, but for the bullying kid to be removed from the dynamic.  This isn’t likely to happen and it isn’t ideal.  You have to remember, the bullying kid is still just a kid. They need the socialization too and we don’t do anyone any favors by isolating such a kid.

Bullying is all about power, so the neighborhood bully is bullying because it gives them control over the other kids.  This is exceptionally powerful juju for a little kid.

From the bully’s perspective, bullying is adaptive. It works. However, even though  it seems adaptive, meaning that the bully gets away with it and gets benefit from it – that benefit is usually short lived. Sure, they gain control over some aspect of their life for a little while, but pretty soon, people get fed up with it.

Recently, my son dealt with a neighborhood bully. Me telling him to be patient, that this kid will end up being ostracized by most of the parents in the neighborhood in the next couple of months – seemed like a lifetime to him.  It didn’t help him in the here and now. In reality – this was sorted out within a 2 week period.

What I knew, as the parent, who was speaking to the other parents – was that my son wasn’t the only victim. We parents were already collectively discussing how best to help this girl be better so that she could participate in the neighborhood but in a way that didn’t harm the other kids. Did we succeed? Kind of – it’s still playing out. The girl hasn’t been around because her behavior was causing other problems between her divorced parents.

The reason this girl is acting out is because she herself is being hurt by other circumstances in her life. To compensate, this very smart little girl was exercising some control over the play dynamics of the neighborhood. My son was one of her primary targets and this caused him emotional and physical pain and distress.  But in the process of her attempts to control her life, she caused all the other parents in the neighborhood to not want her playing with their kids. And there are only so many kids she can play with. She was going to run out of victims sooner rather than later.

While we haven’t yet had an opportunity to implement our strategy for her because she hasn’t been around, I do know the effort we were getting ready to expend is worth it. Again, this is an incredibly bright and talented little girl with leadership skills you wouldn’t believe. If we can help her ease her pain and learn how to channel her immense talents for good, it will be worth it.