I was asked on Quora to answer a question on being an outcast. Specifically, how does one overcome the fear of standing alone for what is right even when that makes you an outcast. Here is my response. 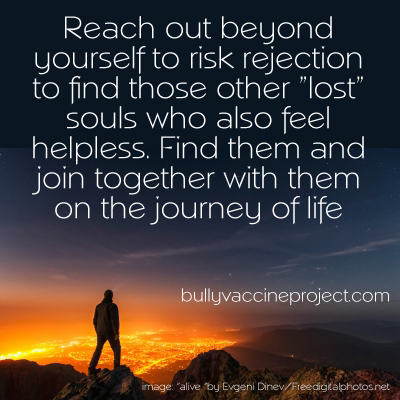 Being an outcast – to me implies freedom. Complete freedom. I don’t have to care what other people think – they have already decided to not embrace me. So I might as well do what I like to do and be the person I like to be.  The freedom that comes from being an outcast is amazing and totally better than trying to be someone else so that you can fit in.

The other thing I would say is this. Standing alone requires courage. Being an outcast requires courage. That’s why the fear comes up and that’s why so few people are able to do that. They are too fearful. Feel proud that you are facing your fears to stand alone, because those who don’t are too afraid to follow, and they deserve our pity.

The next thing is compassion. You can talk a good talk about how we are all equal, but you  aren’t considering those who make us outcasts as equal or those who haven’t realized what you have realized as less than you. Don’t attach negativity to that. When you feel compassion for yourself – which is first you also then need to extend that compassion to those who are not brave enough to follow you on your journey.

Finally, you need to find other people who are also on the journey. The reality is you aren’t alone and you aren’t an outcast. My son is dealing with exclusion in school right now and he is doing much better because he has found another kid who is also being excluded – and they are bonding together as misfits. When we are excluded and rejected it is very easy to get stuck inside our own heads and isolate ourselves. Everyone else has friends. Everyone else seems to be navigating these interpersonal relationships just fine. I’m the one who’s not. But that’s not true. That’s you being stuck in your own head. When you look around and REALLY look, you will see that everyone else, including the people doing the excluding, are all trying to accomplish the same things and they are all insecure and they are all doing their best and failing.

Learning how to be around other people is a skill that we all have to learn. No one is born with this skill. Some are more willing to experiment and put themselves out there. What my son found is that as soon as he stopped feeling sorry for himself and found the courage to just put himself out there and risk rejection, he was able to find another kid like him, who is also alone.

So courage to be a misfit and to embrace the freedom that comes with that. Compassion for yourself and others. We are all in different places in our lives. We aren’t able to see the wisdom in the same way as others. Combine courage and compassion to reach out beyond yourself to risk rejection to find those other “lost” souls who also feel helpless and find them and join together with them on the journey.