It’s not just kids who get bullied. Adults have to deal with toxic individuals too. How can you use behavioral techniques to handle toxic co-workers?

It really depends on how their toxicity manifests. 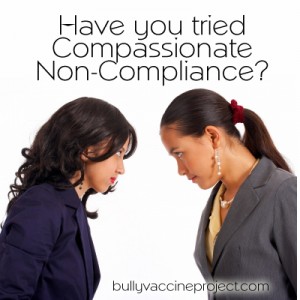 If they are snipers – talking bad about people behind their back – all the time – you plan on something to say – knowing full well, you will be talked about too. But you do this publicly in front of other people and it will give others the courage to do so too. You can say – I don’t like listening to gossip. Or – in this company – we treat each other with respect. Whatever it is has to be said in a calm neutral matter of fact way while making eye contact (if you feel comfortable making eye contact). Don’t be angry when you say this – just – this is not appropriate workplace behavior and I expect more from you. Yes, they will snipe behind your back – but mostly people will respect you for having the guts to shut it down and eventually the sniper will stop “confiding” in you and leave you alone.

If they are bullies – you will want something you can say – similar to what you would say if they are snipers. In this company we treat people with respect. You don’t get emotional or flustered when they bully or are mean. Just insist they speak in a respectful way and refuse to engage in any conversation that isn’t by saying – that’s not how we treat people in this company. When they speak politely – have your workplace conversation as if the nastiness never happened. Again, calm, matter of fact tone of voice with eye contact.

With both of these verbal techniques, you will probably have to practice your chosen go to phrase for when these things happen. But make sure it’s always the same verbal response. You don’t get into an argument. You are stating a fact and are repeating that fact until it sinks in – which can take a while.

If you are dealing with a passive aggressive withholder of resources – document EVERYTHING!!! And I mean everything. This is a CYA move obviously – but your reason for doing this is actually to clear up any confusion. Treat this as a simple misunderstanding (even if it is not) and do your best to be professional with the best interests of the organization in mind. Things aren’t getting done and there is confusion over who was supposed to do that – so clear up the confusion by documenting things.

If you have a verbal agreement – confirm that agreement in writing and cc your boss or their boss to ensure that there is no confusion or misunderstanding later. Be consistent and do this every time. Don’t fight with this person. Just do your best to work with them and if they require excessive follow up documentation – do it. Eventually they will sink under the weight of the obviousness of their obstruction. Don’t worry if they start to bad mouth you. They treat everyone like this and everyone is just as upset and your documentation will prove you aren’t antagonistic. This isn’t a fight or a disagreement. It’s just you trying to make sure there is no confusion and the other person routinely not following through on their work.

1 thought on “How to handle toxic co-workers”