You aren’t what you are called. Don’t take it personally. 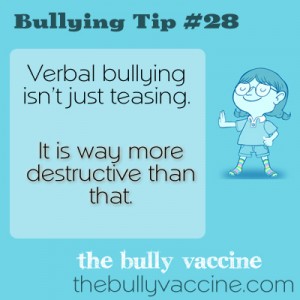 My aunt is a very wise woman. She told me this story during the height of the last political campaign. It has to do with bullying and name calling.

A lady picked up her 2nd grade daughter from after school care. From the back seat, the daughter asks her mom, “Mommy, what does crooked mean?” She answered that it means not straight kind of like a crooked line. Her daughter said, “Well, that doesn’t sound bad. But why do the big boys call me Crooked Hillary and then laugh? They laugh mean like they don’t like me.” The daughter’s name is Hillary.

Name calling is probably one of the first forms of bullying we experience. Being called a name denigrates and dehumanizes. It makes the victim less then human and so not worthy of the normal rules of respect. It is a way to ostracise someone as “other.” This is important to the bullying dynamic because it causes our tribal instincts to kick in. Our group good, other groups evil. If other groups are evil then we have to resist them by whatever means are necessary.

Now obviously, the victim is just a human. They have strengths and flaws like everyone does. But this ostracizing through name calling prevents us from seeing that. And usually the name calling is based on lies anyway. Or things that don’t matter. And the more this name calling goes on the harder it is to undo the damage. The person is ostracized as if they have perpetual cooties.

The current round of political name calling has been going on for decades. We are at the point where one side literally thinks the other is evil. Period. They can’t engage in substantive discussion on the issues because they have been conditioned by the name calling of the “other” side to not be able to consider any argument made by that side as valid.

Now, intellectually we can see that position is nonsense. But we still, all of us, fall into the trap that the name calling causes.

Don’t be part of the problem.

Reject the name calling from your side. I realize it is very satisfying to hear because it makes you part of the “in group.” But it’s not good for us. We are better than that. When we hear someone calling the other side names, ask them to stop. Simply say that’s not true and it’s not helpful. Let’s shut the trolls down and be part of a resurgence of compassion and enlightened discourse.

And for goodness sakes, don’t model this behavior for your kids. My husband and I are very political and we have to watch ourselves because our son hears us discussing things and his instinct is to view politics tribally, because that’s everyone instincts. We have to correct him and say – we just disagree on policy – it doesn’t make the other person evil or bad. We just have different ideas on how to fix our problems.

Thanks for listening and sorry for the rant.