Reporting a bully doesn’t make them stop. It is a necessary first step, but it’s just that, a first step. If you really want to stop bullying, you need a strategy. 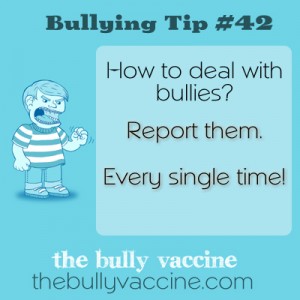 To get a bully to stop, you need to keep consistent pressure on them to stop over a period of time. Basically you have to stop rewarding their bad behavior. You need to increase the cost associated with that behavior and you need to do this consistently over time so that they learn it doesn’t matter how obnoxious they get, they aren’t going to get their reward back.

This is all about training them to not be so obnoxious. Is this easy to do? No. They are being obnoxious and trying to get them to be less obnoxious is only going to make them more obnoxious. I’m sure you have experienced this already.

What you probably weren’t told is that this increase in obnoxiousness is part of the process of getting them to stop. I realize that is counter intuitive. But really, when you extinguish a behavior there is a period of time where the behavior gets worse before it gets better. Every study ever done on behavioral extinction has showed this.

Instead of being frustrated by this phenomenon, accept it. You stop rewarding them, you increase the cost by reporting them. They respond by getting worse. Ok – now what? Now you need a strategy for what to do when they get worse. Preferably a strategy that is science based.

What is that strategy? It depends on your particular situation, but, it basically entails more of the same. Don’t reward them and report them to increase the cost. You do this every single time they are obnoxious. Every. Single. Time. It is the consistency over time that gets them to stop. The mistake people make is that they remove the reward and report but then things get worse so they stop. They think it isn’t working. Again, this is counter-intuitive, but it means what you did worked so keep doing it until they stop. Force them to stop through your consistency.

I realize what I am saying is REALLY hard to do. But this not only works, it’s the only thing that does. There are no short cuts. You can’t just report it and have it stop. You have to keep reporting it until the costs became so high that they are forced to stop.

There are a lot of free videos and lessons on this website. There is also a book and a free book and free lessons as well as a toolkit. Learn what it takes to #stopbullying and share this information with others.