Bullying is about the effect the harassing behavior (whatever that is) has on the victim. The actual behavior may be teasing, hitting, stealing, rumor mongering etc. 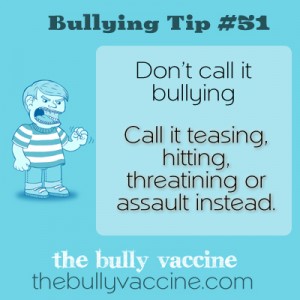 In general – when reporting what has happened, it is better to be specific about the behavior that occurred that was inappropriate. When you report that someone bullied you – you are essentially stating your subjective response to something – and it doesn’t tell the person you are reporting it anything helpful.

Consider if a kid says – hey teacher – I was just bullied. Vs. Hey teacher – this other kid just hit me in the head and told me I was a skank. Which is the teacher going to be more immediately concerned about? The specific statement is about someone’s behavior rather than the generic subjective statement which is about your response to that behavior.

When we say we are bullied, the focus is on us. When we say the other person did – whatever they did – we put the focus where it belongs, on the bully.

So – be specific when reporting. Don’t call it bullying. Focus on the other person’s inappropriate behavior – whatever that is.