It is better to intervene before a child commits suicide rather than waiting to solve the problem after the fact. 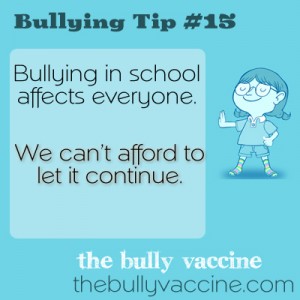 Recently, a girl in Lakeland FL committed suicide as a result of being bullied. (see: http://www.baynews9.com/content/news/baynews9/news/article.html/content/news/articles/bn9/2013/9/10/girl_12_found_dead_i.html)

This case received a lot of coverage. What annoyed me most was that once again, it represents a failure of the adults around this girl to intervene on her behalf before she got to the point where she killed herself.

I’m not blaming her mom, obviously, but people are so unaware that anything can be done, they do nothing. After the fact, the sheriff’s office arrested the two girls who were bullying and charged them with stalking and harassment, which were valid charges, but they came too late to help the victim.

Those charges also did nothing to help the bullies. And yes, that is a concern. We are talking about kids here. Most bullies can be taught to stop bullying and they and society will be better off if we can.

Here are my thoughts about this tragic case:

Do I recommend filing police reports in every case? No. But when the bullying is severe, it is an option and we should no longer be waiting until things turn tragic before using that option. Afterwards is too late.