This applies not only to bullying, but really any interaction. 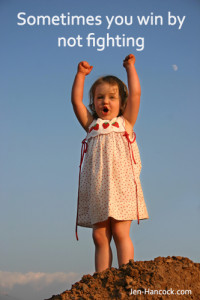 I have written about this before (https://bullyvaccineproject.com/a-tai-chi-approach-to-bullying/) but it bears repeating. Yielding is strategic. When you yield, you are temporarily giving way to put your opponent into the position you want them in so that you can then defeat them.

And while I don’t recommend thinking about bullying as a fight, you do have to recognize that for the bully, that may be exactly how they think about what is happening. Recognizing their reality doesn’t mean you have to accept their reality. What it means is that you can use their perception of what is happening to run circles around them, confuse them and defeat them, without ever fighting with them. Fighting is their frame of reference, don’t make it yours.

Let’s get back to the concept of yielding. Let’s say you are in an argument with someone. This happens all the time with bullying. They say something untrue, you rebut it. Argument. As soon as you start arguing, the people witnessing what is happening can no longer tell what is happening is bullying. All they see is the argument. So don’t argue. Defend yourself a different way.

That different way is to yield the point. Their point, whatever it is, is irrelevant. It really is. What is relevant is that they are trying to make you look bad and that’s not nice. So, yield. Take their point, whatever that is, off the table. Own it. Even if it is not true, so what? So what if it was true. That doesn’t make you bad. And you have no reason to be embarrassed by it. As soon as you yield to their attack, they can no longer use that attack against you to make you look bad.

I’m going to give you an example my son dealt with a few years ago. Someone kept threatening to tell other people he had kissed another boy – which he hadn’t. He was so afraid that people would believe this kid, he was allowing this kid to bully him. Once he stood up and said – a) that isn’t true and b) even if it was, it’s not a big deal – the problem ended. That kid could no longer shame my son for something he hadn’t done. And, that kid got in trouble for telling lies.

Yielding is strategic, not just for bullying, but for any negative interaction really. Even if you are just yielding to get away, you are still using yielding strategically. Yielding is not a sign of weakness, it’s a sign of intelligence and strength. Use it wisely.

If you want to learn more about how to stop bullies, join this website and get my book.

If you want to learn how to win arguments by not arguing, take my online course: https://humanistlearning.com/socratic-jujitsu/