Having a go to phrase to repel bullies really works 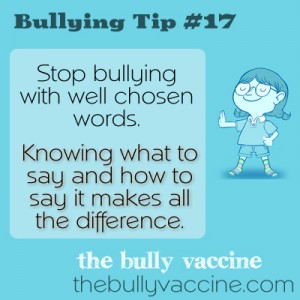 My son is a geek. He is highly gifted and has a learning disability (dysgraphia, sensory processing and executive functioning problems).  He also has a hidden physical disability (dyspraxia and hyperligamentation that results in hypotonia).  All of this makes him a prime target for bullying.

He doesn’t get bullied. Or rather, it doesn’t happen that often. Here’s why. I’ve taught him how to defend himself from verbal bullying so people don’t even start. He’s also smart enough to befriend the popular kids so that they will defend him. It’s kind of scary really. Regardless, here’s what I’ve taught him.

Have a go to phrase. Something you can say when somebody says something mean to you. This phrase is designed to let the bully know you heard them but weren’t bothered by them and really, what they said was pretty stupid and they should stop. It has to be delivered in a calm tone of voice, making eye contact if at all possible so the bully knows you aren’t afraid of them.  This go to phrase is to be repeated as necessary until the bully stops. And yes, as silly as it sounds, it actually does work.

My son’s first go to phrase was “thank you very much for that information. It’s very helpful.” He used that one in kindergarten. Now, in 2nd grade, his go to phrase is “don’t be so juvenile.”

The point of his go to phrase is that he has to feel good about saying it. He has to be able to say it and it can’t be rude or offensive or angry, as that would get him in trouble. He would be fighting back and his teachers wouldn’t be able to tell that the other kid was at fault.   What my son likes about his current go to phrase is that it’s geeky. It includes a word most kids his age don’t know yet. So it has a geeky, I’m smarter then you – don’t engage with me – I’ll win this battle of wits challenge you’ve just issued to me.  Geek Power as my son calls it!

So you know, these go to phrases do have to be practiced. And you have to reteach your child these lessons as they do forget them. They solve a bullying problem. Go about happily and then next year, they have a new class and a new bully and they have to relearn it. That’s fine. They are kids, not adults. That’s how they learn. In fits and starts and with lots of forgetting in the meantime. Again, if they don’t have to practice it because they aren’t being bullied because it worked the first time they learned it – they will forget it and each new situation will seem brand new, even though it’s a pretty standard dynamic.

What’s your favorite go to phrase for dealing with bullies?