That doesn’t mean we have to tolerate it. 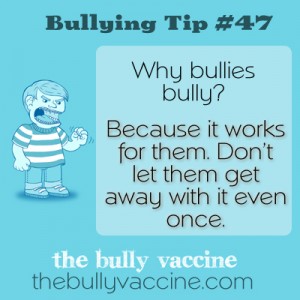 When I started teaching people about bullying, I did so because I was incredibly frustrated at all the misinformation there was regarding bullying. People have all sorts of crazy theories about why bullying occurs. The simple truth is, bullies bully because it works.

Here is an article from the BBC on how bullying is probably an evolved behavior as evidenced by the fact – all animals seem to engage in bullying! http://www.bbc.com/earth/story/20160822-why-bullying-is-such-a-successful-evolutionary-strategy

So why does bullying happen in the animal world? To quote the article quoting Dario Maestripieri of the University of Chicago, Illinois, bullying “ensures that the dominant individuals have better access to food and to the opposite sex.” In other words, it’s adaptive and gives the bully access to resources it then denies to others. It’s a form of stealing. Unless they suffer a negative consequence from this stealing, they have no reason to stop because it’s intrinsically rewarding.

That’s the bad news. The good news is that despite the fact it is rewarding to bullying, it can be stopped and there are things we can do to make it stop. We can stop rewarding it.

Getting bullying to stop

We are humans, no longer apes. Chances are you live in a society that has rules against stealing and rules against hitting and rules against hurting other people. You can use those rules to deny the bully their reward. And if they aren’t rewarded, the behavior goes away. This is why the person at the top of the hierarchy, usually doesn’t stay there for long.

To remove the reward a bully gets for bullying, you have to not be intimidated by them, or rather, not appear to be intimidated by them. Standing up to a bully is basically a performance display. You make eye contact, speak to them calmly and tell them to stop or that what they did isn’t ok. You must be calm when you do this.

The bully will likely respond as they always do, but getting more aggressive. That’s fine. As long as they aren’t physically hurting you and this is a verbal display – you are fine. Just keep standing your ground. If they don’t back off – report them. Every single time.

Just because bullying works doesn’t mean we have to tolerate it. But it does mean we need to stop pretending that bullying is a result of bad parenting or bad behavior. It isn’t. Bullies bully because it works. Understanding that and accepting that reality is the first step to making it stop.

To learn more get my book, join this website and take advantage of all the free material available here. And please share this website with others using the social media links below. The more people know how to stop a bully, the fewer bullies there will be.