Reporting bullying isn’t enough to get it to stop. You have to have a strategy. 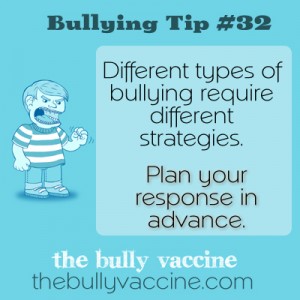 All anti-bullying programs teach kids to ignore the bully and report them. Neither of these techniques, in and of themselves work. They can work, but only if they are part of a larger ongoing strategy.

First, ignoring a bully isn’t really what you should be doing. You should not reward the bully. That’s different. What this means is that the bully is seeking your attention. They want to show others that they can put you down AND get away with it. This is a power display for them. You aren’t being targeted because of who you are. You are being targeted because you are convenient.

What stop rewarding them means is that you don’t give them your attention when they are being rude AND you show you aren’t afraid of them so that their attempt to display dominance over you fails. This is easier than it sounds. What you need to do is have something you can say back. Don’t wait until you are challenged to come up with something. Have something you have planned to say in advance and practice saying it out loud so that when, not if, you are challenged by a bully, you will respond as you want to. My son likes to say – “don’t be so juvenile” or “thank you very much for that information. It’s very helpful” in a bored tone of voice. This will show the bully you heard them but are not afraid of them and that they are not behaving well. You have removed their reward.

The next thing you need to do is not let them get away with it. And that means reporting. With verbal bullying I like to give bullies an opportunity to back down before I report them. So they challenge me, I say what I had planned to say and if they continue trying to bully me, that’s when I report them. Every single time.

What you want a bully to learn is that if they try to bully you, they a) will not get their reward and b) they will get in trouble.

The reason you need a strategy is because reporting them isn’t enough. Most bullies will attempt to bully you more for a while. What they are trying to do is to get you to back down. Because if they can convince you to stop reporting them, they will have demonstrated that they have control over you. Don’t give them that reward. Keep reporting them. Report them when they hassle other people too.

The reality is that someone who has the guts to report a bully is really rather brave. Most people don’t have the courage. By reporting them, consistently, you are showing you aren’t afraid of them, which again, not only removes their reward, it also lets them know, they aren’t in control of you and that if they continue to try – they are going to continually get in trouble.

To get a bully to stop, you need a strategy. You can’t just report it once and be done with it.