If something doesn’t seem right, it probably isn’t.

Bullies are often master manipulators.  They 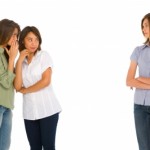 do what they do to gain social control and that involves manipulating people.  One of their tactics is to social isolate certain people to create in-groups and out-groups, the membership of which they control. We humans, being social animals, desire to be in the in-group even if we don’t like the people in the in-group. This is an instinctual response.

Another instinctual response is to be attracted to people with power who can help us better access the resources we need to survive.

Bullies use these two deeply ingrained human responses to their advantage. When they create an in-group that has access to resources, they create an out-group that doesn’t. And this social inclusion and exclusion is key to how they use and manipulate power.

To create social exclusion, you don’t have to necessarily overtly exclude someone, though that happens. More often what happens is more subtle, like the passive aggressive withholding of resources.  The passive aggressive individual does not overtly challenge their targets. Instead, they present a very pleasant demeanor. They are helpful, not hurtful. But through their actions, and the withholding of information they are able to create the social exclusion without overtly being seen to do this.

Classic examples of this in school aged kids is forgetting to invite someone to a party. Oops. My bad.  In the office it can be forgetting to tell someone about an important meeting or a time change, or not getting the promised resources to a person so that they can’t do their job making them look bad.  This is all done under the radar with the bully denying that they do anything on purpose.

When you complain, they take offense. They didn’t do it on purpose; you are imagining a slight that didn’t actually exist. This is the core of gaslighting, which is an attempt to make the victim feel like they are going crazy.

What I have learned from my almost 50 years on earth is this. If someone is making you nervous and/or you think someone is intentionally excluding you, they probably are. You aren’t imagining it. If you don’t normally have problems with most people, but just with a particular individual, then the problem is probably with that individual. If you are unsure, go to a mental health professional and have yourself assessed. If they think you are sane, you probably are and you can then focus on dealing with the gaslighter without doubting your sanity in the process.

Interestingly enough, the solution to a normal gaslighting problem is to take the gaslighter at their word.  What generally happens is that they say one thing and then do another. The fix for this in the workplace is to document ALL interactions with them so that when the inevitable “confusion” occurs, you can go back through your notes to see where the confusion originated.

Note, this will not work if someone is taking extraordinary measures to make you think you are going crazy.

For kids dealing with this sort of thing, my advice is different. Because the stakes are so much lower, just stop trying to please these people. Stop trying to fit in. A gaslighting bully has already decided you will fail so it doesn’t matter what you do. You can’t please them. So stop trying.   Instead, focus on your friends who don’t do this to you. If you find you are in an outgroup – own that and look for the other kids being left out and make friends with them.

When you do this, the gaslighting bully will not like it. They want you out and isolated. By refusing to be isolated by making friends with people other than the bully, they will start going out of their way to target you. This is what is known as an extinction burst.  *Read my book for more information on what this is and why it occurs).  While being targeted overtly is unpleasant, on the plus side, what they are doing is now overt. And that means it is WAY easier to document. So, document and report. Again, my book and the resources of this website can help you with that.