How you can help your child’s most annoying friend become less annoying and their parents will thank you! 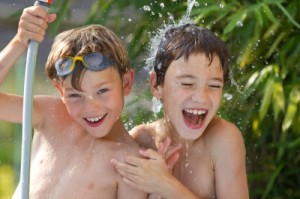 I’m the mom of a 8 year old and we have kids from the neighborhood in and out of our house all the time. A few years ago, one girl in particular – a young one – was turning into a little bit of a bully. I spoke to her parents about it and they were horrified, but were sure she was modeling behavior she was learning elsewhere. So, I trained her to not be aggressive or rude in our house.

She’s very well behaved now and a lovely child. Of course, some of the other parents still have problems with her, but that’s because they haven’t figured out how to train her to behave better despite my attempts to teach them.

I think the first mistake parents make is to assume that the annoying kid is just a bad apple or can’t be taught to behave better. They just are the way they are. That isn’t true. We are talking about kids and if you can teach your own child to behave better, you can help teach the neighbors kid too – assuming the parents have an all hands on deck attitude, which all the parents my kid interacts with do. They can discipline or reprimand my kid and I can do the same with theirs (nothing physical – just – that’s not ok – you need to go home now – or – that’s not nice, say your sorry level stuff). And we parents share information if something happens so the kid can’t deny it later.

What I teach is how to use operant conditioning to retrain bullies not to bully. Basically the technique is called extinguishing a behavior and it can be any behavior you don’t like, like an annoying kid.

The key is to be consistent and to remove rewards for bad behavior and to positively reward the behavior you do want and always make sure the child knows you like them, just certain behaviors aren’t acceptable.

If the reward is to hang out at your house, then sending them home when they behave poorly is usually enough. You just have to be welcoming when they come back and welcoming as long as they are pleasant and only transition to annoyed when they are annoying. Give them the benefit of the doubt – let them live up to your expectations. The reason parents have such a hard time with this is that they are expecting the kid to misbehave and so are annoyed before the child does anything and then they get confirmation bias. If instead you approach the kid fresh every time, it won’t take more than a couple of times before you have a well behaved child in your house. Expect them to behave well, respond calmly when they don’t.

This only works for neurotypical kids though. If the child in question is neuro-a-typical then you will need to discuss tactics with their parents to help maximize the good and minimize the annoyance. Don’t write them off. Learn from their parents what works and what doesn’t. Neuro-a-typical kids need extra help and their parents will likely welcome the additional learning opportunities they receive in your home (as long as they are compassionate and consistent with the therapy they are already receiving).

Yes, dealing with an annoying kid in the neighborhood is annoying. But it takes a village to raise a child and we should all be pitching in with love to help raise a community of caring and compassionate and well behaved adults.