I am being cyberbullied. What can I do to stop it? 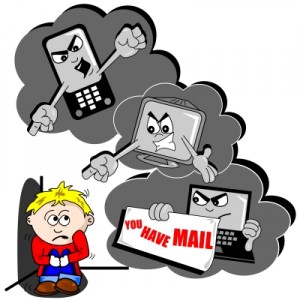 Q: I am an adult and I believe my attackers are also adults. It has been going on for years and my professional reputation has been damaged. The harder I try to get out of the situation, the worse it gets! I don’t understand why they are even doing this to me. I am embarrassed about it and the few times I have tried to talk to someone about what is going on they have either blamed me or said it is useless to fight it. I don’t know what to do any more or who to talk to. Every month when I see a new message or website I feel more depressed. Sometimes I feel like my whole life is worthless now.

A:
First – Don’t respond to anything. Act as if you didn’t see it at all. If it is pointed out to you (by a friend) say – no – I didn’t see it and I don’t pay much attention to that sort of thing. This is stage 1 – non-reinforcement. It’s important that your harassers think that what they are doing isn’t working or not getting your attention – you have to be consistent with this because if they find out you are actually ignoring them they will up their efforts to get you to pay attention to them again – hire someone to monitor their activity for you if you need to, but as long as you respond or worse, ignore and then respond and then ignore again and then respond again, the worse this is going to get.

Second – Capture screen shots of everything! Keep a file, print it out – keep records. Harassment – which is a pattern of behavior designed to harass someone, is illegal regardless of the venue. But you have to be able to prove you are being harassed – and that requires evidence. Consider each of these incidences as part of your proof that there is a pattern of harassment being directed at you.

Third – Most civilized adults ignore flames and attack sites targeting a person. We recognize that there are trolls who do things like this for whatever reason. And on the off chance a potential employer sees something like this – they are likely to wonder what you did to get them to harass you but if you say – I picked up a troll along the way – it happens, the more they feel comfortable writing it off. I get these questions sometimes because I’ve been cyber harassed publically and it’s easy to explain – it has nothing to do with you and everything to do with the harasser, and you don’t even know who they are. It’s possible you did something to upset them but because they are anonymous – you don’t know who they are and don’t know IF you did anything to them to make them mad. This is the truth – stick with it.

Fourth – Has your reputation really been harmed, or do you just think it is because you are obsessing over this? The more you respond in a calm, rational way (ie: these are idiots who don’t deserve anyone’s time), the more respected you will be and the worse the trolls will look. I’ve been stalked. I know how easy it is to become obsessed with the obnoxious behavior of others. But really, most people don’t see this and when they do, don’t pay it any attention. So, while this is a huge deal for you – the people you work with are likely unaware – so it probably hasn’t actually ruined your reputation. However, obsessing over anonymous trolls can make you seem paranoid (though you aren’t if it is really happening). So, you need to find a way to not obsess and ignore it – block it – whatever you need to do to not trigger yourself (see #1 on why this is important).

Fifth – if you have developed PTSD as a result of this – and you probably have – you should go see a professional therapist who can help you with the emotional fall out. Your friends and co-workers don’t have the skills necessary to help you cope, so find a professional who does. This will give you an outlet to vent that is appropriate and will help you maintain your professionalism in other areas.