Discussion about victim-blaming as it has to do with domestic violence survivor. 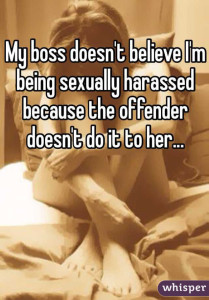 Examples of victim blaming statements: “Well, you should just leave him.” Or, “It’s her own fault for dressing that way.” How can people respond to these types of statements rationally and soundly, whether they come from a friend or family member, or a complete stranger on the Internet?

I teach how to use operant conditioning to get bullying and aggressive behavior to stop -specifically focusing on behavioral extinction dynamics and how to control them. And yes, this directly impacts abusive relationship dynamics and also helps explain why it’s so hard to get away and why the risk of retaliatory violence is so high immediately after triggering events.

What is needed is something to say. It should be practiced in advance and delivered in a monotone voice. No arguments. Just – prepared statement delivered in a robot-like voice. What exactly is said depends on what type of victim blaming is occurring.

“You/they should just leave him.”

Response: Ideally. Yes. The reality is that the behavioral dynamic makes that VERY hard to do. So don’t judge. (Smile and make eye contact – repeat as necessary until they shut up).

“Maybe if they didn’t dress that way.”

Response: That’s irrelevant to what happened. (make eye contact – repeat as necessary until they shut up).

Don’t argue, just state the fact and let them move on. If they ask why – you can explain the science. For the – you should just leave – there is science of conditioning and the fact that abusive behavior tends to be variable – sometimes they are nice, sometimes mean, that actually binds the victim to their abuser in a way that is incredibly powerful and until you experience it, you don’t really understand why it’s so hard for people to leave. If they are asking about the clothing, It’s irrelevant. Period. What I am wearing if my purse gets stolen is irrelevant. Women can walk naked unmolested in most places if they had to because most men don’t assault women. Period. Most people, if they saw a woman walking naked down the street would probably intervene to help her, not assault her. People who assault other people, have something wrong with them.

But again, this is not about arguing, it’s about being clear – that line of discussion is irrelevant. By not engaging in the discussion we are not rewarding that line of questioning or thinking. That’s irrelevant and redirect to the questions that should be asked. Repeat that enough and the victim blamer will move with you to the better questions we need to be addressing, like -given how hard it is to leave, how can we best help and support women who need help? Or in the case of “clothing” Why are we tolerating and excusing the bad behavior of a few individuals when it’s really clear that the overwhelming majority of humans do not respond to “clothing” in this way?

Again, this is based on behavioral techniques on how you stop unwanted behavior. To learn more – get the book, join the website and be sure to share this information with others.