Do not bully the bully. It doesn’t work. Not only that, if we allow bullying to escalate to the point that a victim thinks their only option is to fight back, we’ve failed! 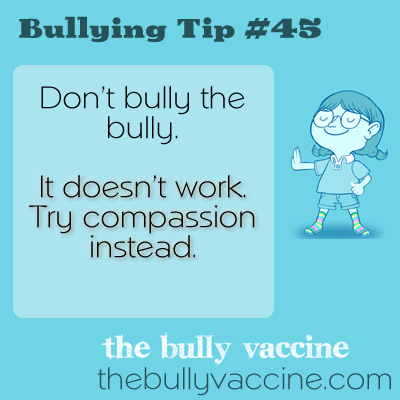 Addicting info has a wonderful article about why we need to nip bullying in the bud before it gets violent. It highlights a video (that has been taken down) of a girl beating up a girl who had been teasing her about her dead sister. http://www.addictinginfo.org/2015/01/18/bully-gets-destroyed-after-mocking-schoolmates-dead-sister-for-the-last-time-video-nsfw/

The columnists point is correct, “If enough kids had had the guts to nip the bully’s mean comments about the girl’s dead sister when the teasing started, the whole thing may never have happened.”

I agree. Whenever I speak about bullying, I inevitably get someone who says – well, you just have to bully the bully back so that they leave you alone. Or punch them and they will leave you alone. It’s the only thing bullies understand. Ummmm, yeah. If it gets to that point, it means we have failed.

We need to stop tolerating bullying and intervene sooner. Before it gets egregious enough to make headlines.