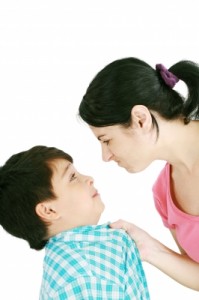 According to the American Academy of Pediatrics – sibling bullying can cause substantial mental health distress. It is not “normal, minor, or even beneficial.” See: http://www.aap.org/en-us/about-the-aap/aap-press-room/Pages/Bullying-of-Brothers-and-Sisters-Should-Not-Be-Ignored.aspx?nfstatus=401&nftoken=00000000-0000-0000-0000-000000000000&nfstatusdescription=ERROR%3a+No+local+token

Kids can be mean. We all know that. And older siblings will often torment their younger siblings as sport – something to do because they are bored, or because they think it is fun. It’s hard as a parent to distinguish arguments and fighting from genuine bullying that is going on. After all, conflicts among people are normal, aren’t they?

Not really. I suppose for some people they are, but I’ve been married 14 years now and my husband and I have argued or fought a total of about 3 times in all that time. In healthy relationships, disagreements are settled without resorting to violence or even arguing.

My son is currently dealing with a neighborhood bully who bullies her little brother, and my son and is coercing another girl, who my son has been friends with since they were 2 into excluding my son from games.

It’s interesting. When we first met these two, it seemed as if the little brother had emotional control issues. He would literally start raging when something didn’t go his way. And his older sister always seemed calm, cool and collected. But I haven’t let the girl in my house in a few weeks because she hit my son, intentionally. Since then, her younger brother will come over by himself and I’ve noticed something. He’s completely different when she isn’t around. He smiles, he’s happy and he plays well with others. The problem wasn’t that the boy had issues, the problem is that the older sister does.

This little boy and my son came running into the house the other day and hid under a desk so that his sister couldn’t find him. When I told him she wasn’t allowed in the house, he visibly relaxed and set about playing. What is happening is not normal sibling rivalry. It’s abusive. The “game” she was playing when she hit my son was called bad dog. She hit him because he didn’t want to play and she didn’t give him permission to leave. If this was a man treating his girlfriend like this – it would be obviously abusive. The fact that it is a kid doing it doesn’t make it any less so. Yes, her age is a mitigating factor, but if we dismiss what she is doing as normal child behavior, we miss an opportunity to help this young girl learn how to interact and lead without being physically or verbally abusive. Surely that is a task worth taking on.