“Spite is anger which is afraid to show itself, it is an impotent fury conscious of its impotence.” – Henri Frederic Amiel 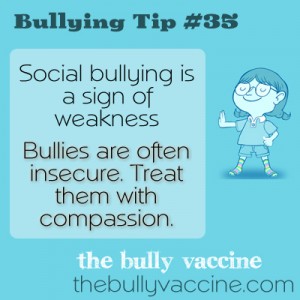 Some bullying is spite. The person is angry or afraid and they don’t’ know how to express that emotion or they are unable to (impotent) and their emotion comes out as spiteful behavior.

Spite is defined as: “a malicious, usually petty, desire to harm, annoy, frustrate, or humiliate another person; bitter ill will; malice.” Sounds a lot like bullying to me.

There are many reasons why people bully. Sometimes they do it just because they think it’s fun. Sometimes they are insecure and trying to pretend that they aren’t by bullying someone else. And sometimes, the behavior is just plain spite.

If you are the victim of this, don’t take it personally. You might not have done anything to deserve this person’s anger. In fact, they might not be angry with you at all. It might be that what scares them or makes them angry is too powerful to confront, so they take it out on someone else.

What matters for you, if you are a victim, is how do you get them to stop.

1) Feel sorry for them. It doesn’t matter why they are behaving inappropriately, only that the behavior is inappropriate.
2) Calmly and compassionately challenge their behavior. You can do this by having something planned to say that makes it clear their behavior is not ok. (We call this a delta – a signal that what just happened was not ok). The best way to do this is to feel compassion for them. That way – your response is not born of malice.
3) Look them in the eye (or close to their face) and wait for them to respond.

At this point, one of two things will happen. Either they will disengage or they will escalate. If they disengage great. If they escalate – just repeat your planned phrase and continue looking at them. Do this enough times, they will eventually disengage.

What the bully will have learned is that – it doesn’t matter what I do, they aren’t going to respond the way I want them to and in fact, they are making me look bad.

Will they be mad at you for doing this? Yes. But so what? It wasn’t like they were being nice to you before this. Will they try to find other ways to get to you – out of spite? Probably. And when they do – you will be prepared to not let them get away with it.

Eventually they will either stop or their behavior will become so bad that the adults around you will start to give them consequences. That’s their problem, not yours.

Spiteful people really want an audience. They want the person they are mad at or afraid of to notice them. Their bullying is like a performance. Like a display to make themselves seem bigger. It doesn’t matter how much a spiteful person wants you to pay attention to them. Don’t respond by giving them your positive attention. If they hassle you – call them out and move on.

To learn more – get my book or join this website.