How little changes can make a huge difference. 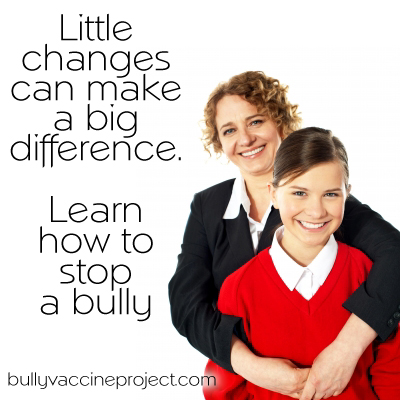 When it comes to getting bullies to stop, consistency is key.  Bullies need to not get away with bullying. Every time they do, the habit becomes a little bit more ingrained and a little bit harder to deal with.

The key is to remember that when training a child, making sure that the bad behavior is interrupted and that the consequences are immediate. They don’t have to be severe. When kids are young and in kindergarten, just a talking to may do the trick, though if it is serious enough, a conversation with the child’s parent will be warranted.

According to statistics, 98% of kids would like it if teachers intervened, in real time, but teachers only intervene 4% of the time. This isn’t the teacher’s fault. Kids don’t always tell them what is going on. In fact, they rarely do. This is why it is all the more important to take quick action when they do muster up the courage to report something.

There are actually very simply ways adults can encourage and reinforce reporting so that kids do more of it. I think the reason we don’t do these things is because of the hassle that over reporting children create. You just can’t get much done when kids are reporting, well, everything.

However, we need to keep in mind that of the two: over-reporting is preferable to under reporting. Under reporting allows bullying to flourish without the adults even being aware of it. Over-reporting, while slightly annoying, gives us opportunities to teach children conflict resolution skills. And we need to remember, they are kids, they do need to be taught this stuff explicitly.

3)         Mediate: Seek facts and listen to all sides of the dispute, suggest solutions

It is super important that everyone involved with children make sure that the kids know that their concerns and complaints are being handled. My son was punched in the stomach on the bus and he reported it to the driver, who told him to move along. He didn’t know she had written up a referral and he thought that she wasn’t acting on the report even though she was.  This gave him the impression, reporting wasn’t worthwhile, even though it clearly was.

What’s worse the kid who was doing the punching was never told by an adult to stop. He had no idea he was being written up or what that even meant. He was a kindergartner. Without meaning to, the bus driver, who was doing the right thing, gave the kids the impression that asking for help results in nothing happening. And this is with an egregious situation where a kid was literally punching other kids!  Is it any wonder kids stop reporting?

All the bus driver needed to do was to tell the child to stop. If they didn’t, they would get a referral and their parents would be notified. This needs to be done publicly in view of all the children to be effective and it wouldn’t take much time. Every time she writes up a referral, the kid being referred should be told. The kids who witnessed the violence need to know that something is being done to keep them safe. All that is required is a quick statement from the driver or bus aide alerting the kids to what is taking place.

When you thank a kid publicly you reinforce them. It makes them feel special and courageous and moral and that feels good. It also sends a message that reporting is expected and appreciated. You want kids to report; you need to positively reinforce them.

Seek facts, listen to all sides and suggest solutions.

Most acts of violence, especially with younger children, are a result of conflict. As my mom always said, it takes two to fight. By asking questions, being fair and even, you can help kids learn to see the other side and work around misunderstandings that lead to conflict. By taking the time to learn what kids are thinking and why they did what they did, you can also learn more about what the dynamics are. It isn’t unusual for a kid who is lashing out to be doing so out of frustration over being hassled by the other kid.

Even though it isn’t ok to use violence in frustration, by asking questions and suggestion solutions, you model non-violent conflict resolution.  You are also letting kids know they will be treated fairly and in the event of an actual bullying situation, you will be better able to see if happening if you take the time to truly pay attention to the interpersonal dynamics at play in the classroom.

And yes, I realize this takes time away from teaching. However, bullying and stress related to interpersonal conflict negatively impact a child’s ability to learn. It’s worth taking a little bit of time to address these things properly.

If you decide a referral is warranted, it is critical that the child you are referring KNOW you are writing them up. In the bus incident where my child was punched in the stomach, the bus driver wrote up a referral. It was actually her second with this child. The problem was, he didn’t know he was being written up or what that meant. He thought he was getting away with it. When my son threatened to report him, he told my son that he had punched a bunch of kids and nothing ever happened. Fortunately, my son reported him anyway.

Here is the problem. Yes, the bus driver did what she was supposed to do. However, the kid was not aware he was written up so for all intents and purposes he hadn’t been. By  the time these reports made their way through the system, this kid had at least 4 referrals and was half way to being banned from the bus.

Had the driver stopped and talked to this kid and let him know he was being referred and what that meant and that his mom was going to be told and had she stopped to talk to the mom when she picked him up at the bus stop, perhaps this kid would have stopped punching other kids after the first time he was reported.

This is the only suggestion that is difficult to implement. But here is the problem in a nutshell. Referrals are paperwork and paperwork means delays as the paperwork goes from teacher to administrator to principal and finally some action is taken.  In the case of referrals on my son’s bus, it can take 3 to 5 days for the principal to be notified before she can notify the parent that their child was written up. That’s an entire week before a parent was told their child punched another kid.

Children push boundaries. If they can’t find the boundary because they don’t know they have crossed it because no one told them they had and their parents weren’t told they had, well, why should we expect kids to alter their behavior?

All my son’s bus driver had to do differently was to talk to this kid’s parent when she picked him up from the bus stop. Tell her what her son did so she could take corrective action and talk to him that very night and let him know such behavior will not be tolerated.  Because this didn’t happen, several kids ended up getting punched. And the tragedy is, that would have been avoidable had it not been for the delays in reporting and consequence.

I realize that with any bureaucracy, delayed paperwork is going to happen. But all that we need to do is make sure that there is some mechanism to notify the parent the very same day.  My school has a nightly parent report that parents have to sign. This sort of daily report is a perfect way to ensure parents are made aware of behavioral problems as they occur. Making sure a copy of the referral slip is sent home with the child is another way. Certainly a school could get referral slips like check books that have an instant copy sheet so that they don’t have to write the same thing twice. Or better yet, an electronic system that notifies everyone immediately so no paperwork can get lost and the system could send an email or text to the parent. That would work too.

Regardless, people writing up referrals should be empowered to contact and alert parents immediately that a referral was made and why. Email, phone calls, whatever it takes. Parents need to know their kids got a referral that very same day.

In order to help kids find value in reporting and to make sure problem children don’t escalate into bullies, we need to:

3)         Mediate: Seek facts and listen to all sides of the dispute, suggest solutions